Ayurveda and Thai Yoga: Religious Therapeutics Theory and Practice,  Ayurveda, Indigenous Traditional Thai Medicine and Yoga Therapy is strongly based on Classical Indian Ayurveda. The Indigenous medicine systems of India (Ayurveda, Yoga) have been practiced in one form or another in the land we call Thailand longer than the land has been called Thailand. This comprehensive textbook covers the fundamental theories and philosophy of Traditional Thai Medicine.

Ayurveda and Thai Yoga: Religious Therapeutics Theory and Practice,  Ayurveda, Indigenous Traditional Thai Medicine and Yoga Therapy is strongly based on Classical Indian Ayurveda. The Indigenous medicine systems of India (Ayurveda, Yoga) have been practiced in one form or another in the land we call Thailand longer than the land has been called Thailand.

Ayurveda of Thailand and Thai Yoga originated in the pre-Thai dawn of the great Indian vassel kingdoms of the Khymer and Mon civilizations and in the TheravedaBuddhist medicne practices found within the orders of monks and nuns (the Sangha). The term “Ayurveda” combines the Sanskrit words “ayur” (life) and “veda” (science or knowledge).

Ayurvedic medicine, originating in India, is one of the oldest systems of indigenous, traditional medicine in the world. Many Ayurvedic practices predate written records and were handed down by word of mouth. The ancient Thai people adopted these ancient traditions and over time adapted them to their way of life. Ayurveda of India, Khymer and Mon cultures became” Ayurveda of Thailand”!.

The ancient Sage, Monk and Vidya (Ayurvedic Physician) Jivaka or Shivago Komalaboat, the patron saint of ITTM is credited with introducing Ayurveda first to the Buddha himself, successfully treating his illnesses over time and then under the Buddha’s authority to the developing Sangha. This became one of the foundations of Buddhist medicine and led to the idea that medicine and wellness of mind, body and spirit together were equally important in pursuing a compassionate life and spiritual enlightenment. These teaching spread across Asias and S.E. Asia and became the dominant medicine of the indigenous cultures found there.

SomaVeda Integrated Traditional Therapies® Thai Yoga represents a spiritually based approch to integrating and practicing these ancient teachings in a modern ministry of counseling and service. Classical Indian, Indigenous Traditional Thai Ayurveda and Yogy Therapy have been adopted as primary religious therapies of the Priory of Saving Grace and the Native American Indigenous Church. When combined in practice with the sacred medicine practices of Indigenous people these arts give us the possibility of expressing a comprehensive vision of what sacred healing practiced by authorized ministers and medicine persons was always meant to be. Healing is now and always has been an expression and practice of our indigenous religion.

We now have practical means to be able to bring this medicine to our community. Life cycles out harmony with nature keep people from experiencing life in a full and productive way. These healing practices are seen as opportunities to learn a balanced way of living with nature. The nature that is outside of ourselves and the nature that is within. These remarkable teachings regarding restoration and maintenance of life have now been passed on to this generation. Thai Ayurveda/ITTM/ Yoga Therapy incorporates elements of counseling,energy balancing, sacred nutrition and plant based diet, mindfulness, gentle rocking, deep stretching and rhythmic compression to create a singular healing experience. This work, as it brings fundamental elements and energy into harmony; creates wholeness of mind, body and spirit, in the client and the practitioner as well.

Be the first to review “Ayurveda and Thai Yoga: Religious Therapeutics Theory and Practice” Cancel reply 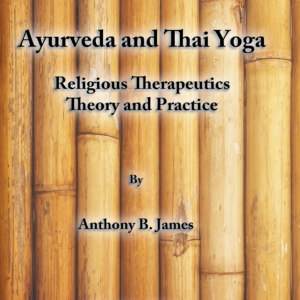